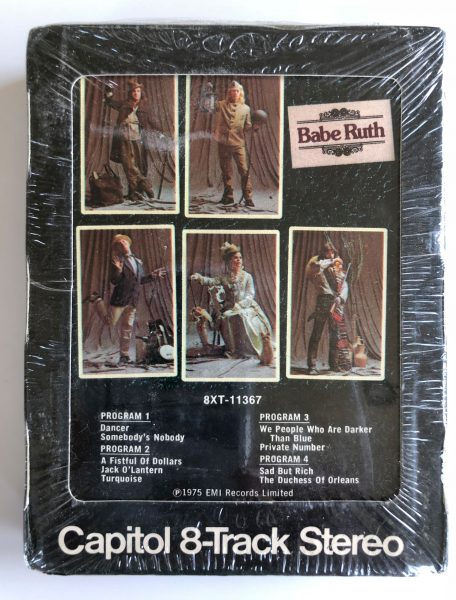 Who’s the artist? UK hard-rock band Babe Ruth, described as being blues-rock and prog-rock but I’m hearing a lot of glam on this album.

What’s the album? Their third album, self-titled and released in the US on Capitol in 1975.

What does it sound like? “Crazy on You” by Heart. Bold if pop-accented soft-metal jams with strong, soulful female vocals; Jenny Haan’s singing style may well have inspired Ann Wilson’s. In the more glam moments Haan sounds more like Suzi Quatro, and Grace Slick figures in here somewhere too. There’s a consistent thread of flamenco-inspired electric lead guitar, though I wouldn’t call this Latin rock.

Why did you choose it? I knew the band only from its 1973 cult rock-disco hit “The Mexican” (I even wrote about the song on this site’s Disco Lab series. A member of a Facebook 8-track group had this 8-track for sale and I grabbed it on impulse.

Is this their best album? I haven’t heard any others so I can’t say. Debut First Base is better known, at least, thanks to “The Mexican.” 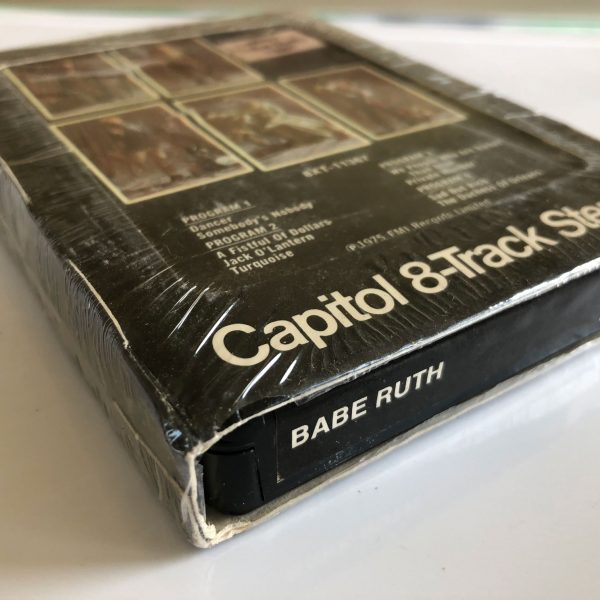 What else had they done? Only First Base and sophomore album Amar Caballero.

How and/or why did they record it? Record contract obligation, really, more than any unique vision, though the material here is quite inspired.

What songs would I know? The only single from the album was “Private Number,” a surprisingly effective power-pop cover of the sweet soul hit by William Bell (think Heart’s version of “Tell It Like It Is”). Most listeners will also recognize the Morricone spaghetti-western theme “A Fistful of Dollars,” presented here as a brisk guitar instrumental. (Article continues after song…)

What other songs are good? “Jack O’Lantern” is a punk-paced Halloween story about a Peeping Tom who gets his dad sent to prison for his own perverted crimes. The band also offers a second soul cover, a version of Curtis Mayfield’s “We [The] People Who Are Darker Than Blue” that meanders into a stoney rock freakout.

What’s a cool song quote from the album? “Heaven knows I could be wrong to love a guy like you / Your rags and my riches won’t do.” (“The Duchess of Orleans”) 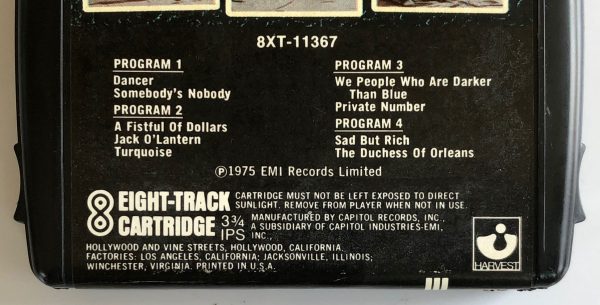 Do the title and cover art work? The title’s OK; as far as I know, the album accurately summarizes the band’s style and intent. The cover’s awful, showing separate small pics of the band posing formally in Elizabethan garb. It makes this album seem like stuffy chamber prog-rock, which it’s definitely not.

Was the album a hit? Reaching #75, it seems to have been their biggest US hit, but that ranking is by no means a smash. To its credit but perhaps financial detriment, the band refused to promote Haan as a cover girl for its albums, instead choosing faceless, generic album cover images (often baseball-themed, per the band name).

How’s the 8-track version? It’s perfect; nine songs and none broken, kinda hard to do. Both soul covers are on the same program, facilitating comparison between them.

What’s missing on the tape from the LP album art? Not much, just another period-costume pic on the back. The inner sleeve offers some rando trippy illustrations and a full set of lyrics. 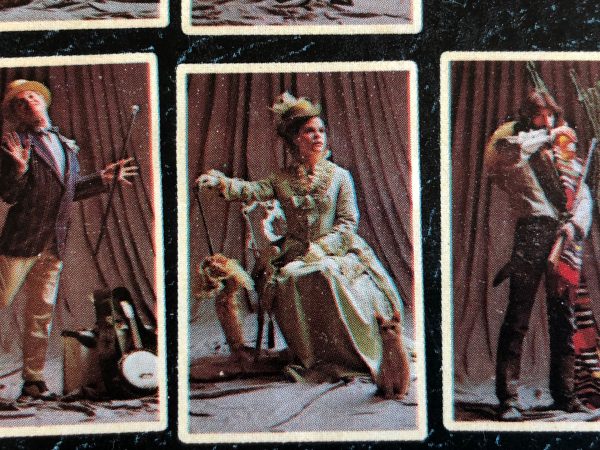 Is this an old favorite of yours? As of this morning! It arrived in the mail today; I played it and really liked it.

Are people still listening to it? I don’t think so, though another Facebook 8-track fan commented that he liked the album too. After a 30-year hiatus, the original lineup reformed the band in 2005, so they’re keeping the dream alive at least.

What’s some random trivia about this? Liner notes feature a quote from dystopian futurist and acid enthusiast Aldous Huxley.

When should I play this album? Getting ready to go out, applying glitter to wear to a keg party.

What’s another good album of theirs? You and I should both check out debut First Base from 1973 to hear “The Mexican” and more. Fourth album Stealing Home, from later in 1975, features the song “Elusive,” a hit in US discos and UK northern-soul clubs.